Shortly after the release of the new BlackBerry KEYone, the company revealed its latest phone – the Blackberry Aurora. The phone comes with great specs at an affordable price. Let’s take a look at it.

There is a new entry-level mobile phone from BlackBerry. Many rumors and leaked images has been swirling around the net for a few days. Now it is officially launched, but only available in Indonesia. In contrast to the recently introduced BlackBerry KeyOne which is produced by the Chinese TCL , the Aurora is not made by TCL. The new device is produced by BB Merah Putih, a local smartphone provider in Indonesia.

The Aurora is Blackberry’s first dual SIM mobile phone and brings up advanced entry-level hardware. These include a quad-Core Snapdragon 425 mobile processor, 4GB of RAM combined with 32GB of internal storage that can be expanded up to 256GB via a microSD card as well as a 5.5-inch IPS display with a resolution of 1.280 x 720 pixels. 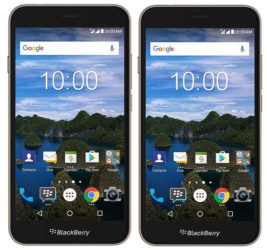 In terms of  power, the new Aurora features a battery with the capacity of 3,000 mAh, definitely enough for daily usage. As for cameras, the company equipped its latest BlackBerry with a 13MP rear sensor and an 8MP front snapper for nice selfies. Moreover, it measures  152 x 76.8 x 8.5mm and weighs 178g and is working on Androit 7.0 Nougat. Unlike the last BlackBerry mobile device, this one sports a touch-only display, that means it has no physical keyboard like the KEYone.

As expected, the BlackBerry Aurora is coming as an entry-level smartphone in three beautiful color options as black, silver, and gold. And as mentioned above, this phone is just available in Indonesia. The price has been set at Rs. 17016 (around $260). Would you buy the new BlackBerry Aurora? Let us know in comments.