Samsung launch Galaxy S6, Galaxy S6 Edge at MWC. The most beautiful phone with a lot of positive improvements

The Samsung Galaxy S6 and Galaxy S6 Edge was officially introduced at MWC. It highly looks like Samsung seems to be happy with the limited edition of Galaxy Note Edge success and they decided to keep the “edge” devices around.

“Beautiful” and “super light” are the first impression when touching these phones. Its appears that Samsung is really serious in order to “renew” their design as well. Clearly, the design of these smartphones are completely diferrent from other previous Samsung devices. From some high-specs, such as: solid metal rim, the rim surround camera as well as quad-core 14nm processor, RAM LPDDR4 and improved user interface shows an effort to create a product not good only in appearance but also in power and software.

The Samsung galaxy S6 as well as Samsung Galaxy S6 Edge are the most beautiful flagship of Samsung’s Galaxy devices to date thanks to a huge improving in design. This is the first time Samsung use metal frame from switching from an all-plastic shell.

The first impression is super light phone, therein, only 138g/136g for Samsung Galaxy S6/Galaxy S6 Edge respectively. So, when you get this phone in their hands, you will have the comfortable feeling after a long time using.

Besides, this couple is also really slim, with 6,8mm/ S6 and 7mm/ S6 Edge but in reality, we have the feeling that the Samsung Galaxy S6 Edge is slimmer probably thanks to dual-edge in both sides.

Different from Galaxy Note Edge, Samsung Galaxy S6 Edge has the display glass bent on both sides of the phone. As previous leaks, the Samsung Galaxy S6 Edge will not come with the latest Snapdragon 810 chip, probably due to the overhearing issues. The most oustanding spec is only 14nm process and frankly more energy-efficient and producing less heat compared to 20nm Snapdragon 810. Its phone is powered by Exynos 7420 chip – an octa-core 64-bit CPU with four Cortex-A57 cores ticking at 2.1GHz and four Cortex-A53 clocked at 1.5GHz. The Exynos 7420 chip uses a Mali-T760 GPU and comes bundled with 3GB LPDDR4 of RAM. Some other its advantages are OIS, phase detection autofocus and has a single-LED flash. We expect that the 4K video recording will be added in this device sometimes.

In additionally, for camera department, the “selfie” shooter is 5MP, capable of 1080p video capturing. The new Galaxy S6 and Galaxy S6 edge feature 32GB / 64GB / 128GB storage, non-expandable though. The tiny drawback is the protruding main camera but we’re sure that with all of listed above specs, this advantage is just a small thing for us.

The other addition, such as: LTE Cat.6, Wi-Fi ac, Bluetooth 4.1, NFC, GPS with GLONASS and Beidou, IR blaster and FM radio.

For battery capacity, these phones are powered by a 2,550/2,600 mAh for Galaxy S6/ Galaxy S6 egde respectively.

For OS, the Galaxy S6 and Galaxy S6 edge run on the latest Android 5.0 Lollipop maintained the latest TouchWiz UI with Material design and cleaner interface. The TouchWiz on the the Galaxy S6 Edge obviously offers various features and apps, concluding a newer and better version of the Quick Glance info for the lockscreen.

As for release date, the Samsung Galaxy S6 and Galaxy S6 edge will announcedly launch on April 10th in 20 selected markets, the others probably come in May.

For the price, we still don’t get any idea about its price yet.

Here are some hand-on pics 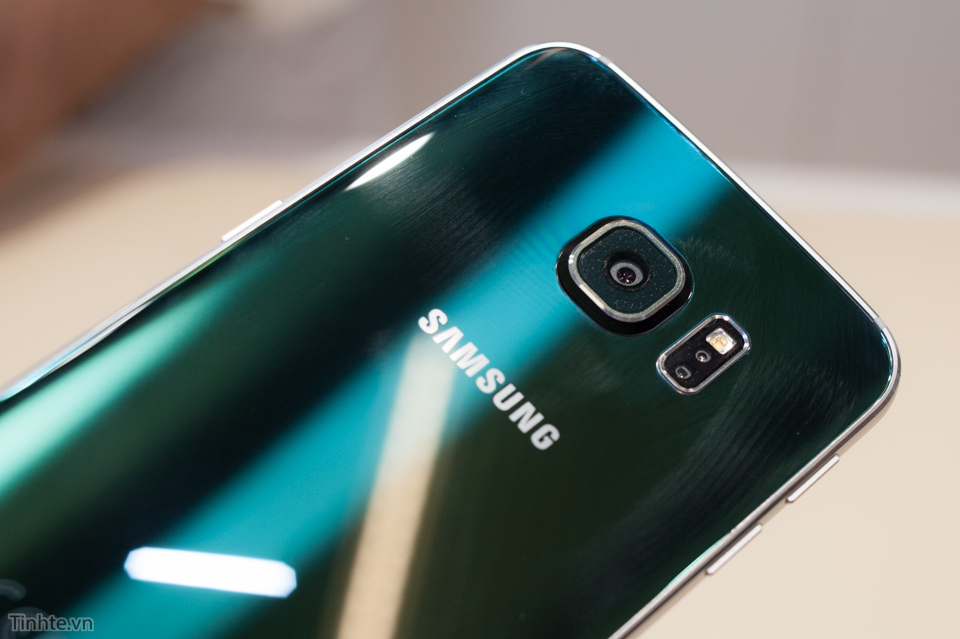