Have you ever heard about a Lumia smartphone equipped with a special QWERTY keyboard like Plumage? Here it is! So beautiful and powerful… 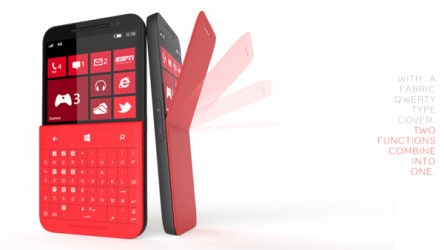 Lumia Plumage – Design and specs of a unique flagship

Lately, we have been able to spot an interesting handset called Plumage and also excited to know it is a Lumia model. What impresses us most is its design with a super cool QWERTY keyboard. Looking at the pictures, you will notice that Plumage’s keyboard acts as a real set of keys to type, of course, and a cover to protect the device’s display. Well, it is like “killing two birds with one stone.” Moreover, we learn that it can be exchangeable and connected in a way similar to Microsoft Surface Touch with its Type Cover keypad.

That’s for appearance. In terms of Lumia Plumage specs, though there is not much information, what we know about the Plumage’s hardware will satisfy you for sure. Accordingly, the machine will sport a handy 2.6-inch HD screen, 3GB of RAM, 32GB of internal storage (expandable via a microSD card slot), and a 1.3GHz octa-core processor. As for camera, the main one will be capable of 20 megapixels with PureView tech and the secondary snapper will be 8MP.

Besides, under the hood, it will probably pack Windows 10 mobile OS and a 3,000mAh battery to run the whole phone. However, apart from those specifications, there are still some necessary details needing confirming to complete the Lumia Plumage spec sheet. So, let’s wait and see!

What price tag should Lumia Plumage have?

Lumia Plumage price is still unknown. Nonetheless, for an awesome device like that, we guess it should cost around $250, yet if Lumia smartphones want to attract a lot of consumers, it’d better be more affordable. Say, $200 can be a good idea. Don’t you think? Now, it’s your turn to tell us your opinion and feeling about Plumage!